CHAMPs is nothing new, and quite frankly, that may be the best recommendation for revisiting it. Teachers have been singing its praises for more than a decade—which speaks volumes about its effectiveness in an age where educational initiatives turn over faster than a dealer flips cards in Vegas. But I’ll be honest with you. When CHAMPs was first presented to me, I loved the idea of it, but thought, I’ll never be able to keep up with it day in and day out.

Rather than abandon it completely, though, I made a few tweaks and wound up with a system so easy and effective that colleagues kept asking about it, and my principal had me lead a school-wide workshop on it. I call my modified system CHAMPS 2.0, and I’m going to share my changes with you so you can implement it (or update its use) in your own classroom.

Now, this post isn’t a deep dive into CHAMPs itself. If you want an introduction, watch creator Randy Sprick describe it in this video overview . Or, order a copy of the CHAMPs workbook to learn all of the nitty-gritty details. For the purposes of this post, it’s enough to say CHAMPs is all about communicating clear expectations for building a positive and productive classroom environment. What I found problematic about it was how the program recommended I communicate those expectations to students—creating posters, in advance, for each activity, then changing posters whenever we transitioned to a new task.  That’s a big red flag for me. 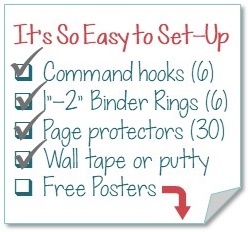 You see, or maybe you know this from personal experience, middle school students have the attention span of a squirrel. (No judgement-just stating a fact.) We never spend more than 15 or 20 minutes on any one thing. Plus, I tend to use a HUGE variety of learning activities to keep things fresh. That translated to creating dozens and dozens of different posters that I’d have to store and shuffle through, posting and reposting that day’s selections through each class – seven times a day! Nope. I knew myself well enough to know that even if I assigned a student to be my “poster changer,” I’d have to invest time every day sorting through myriads of CHAMPs posters and prepping them for easy access.  Which brings us to my mods. 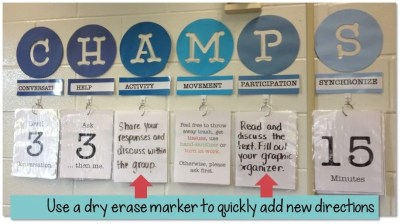 Modification #1: Display
Initially, I tried adding a CHAMPS slide to each PowerPoint presentation, but unless I could leave that slide up during each activity (and often I wanted to show instructions, text, or examples instead) it defeated the purpose of posting the expectations for easy reference. Eventually, I hit upon this solution… using binder rings and page protectors. It was simple, easy to swap out when we changed activities, and always available to point to whenever students needed a gentle reminder. I’ve seen other teachers use wall charts with similar success, but I wanted something that was easy to read from across the room.

Modification #2: Adding Time
Each letter in the acronym CHAMPs stands for something: Conversation, Help, Activity, Movement, and Participation. Technically, the S stands for “Success” and isn’t so much an expectation as a reminder of the desired outcome. Now, I quickly realized that students also need a timeframe for each activity to help them budget their time. (I realized this, of course, after having to tack the allocated time onto my CHAMPs spiel each and every time I presented a new task.) So, for my display, I changed the S to “synchronize” instead. (Actually, I gratefully credit veteran teacher and author Judy S. Gould for this innovation… offered to me during my first years of teaching. Thanks, Judy.) 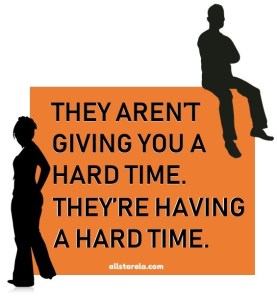 While there is no silver bullet putting an end classroom misbehavior (*deep sigh*), CHAMPS is by far the most effective behavior management system in my arsenal. If I had to estimate, I’d say it eliminated about 70% of the errant hijinks and established a non-confrontational way to address the rest. It’s like this quote I found on Pinterest says of disruptive students, “They’re not giving you hard time; they’re having a hard time.” CHAMPS is just a way to reveal and remind students what they should be doing in order to thrive. 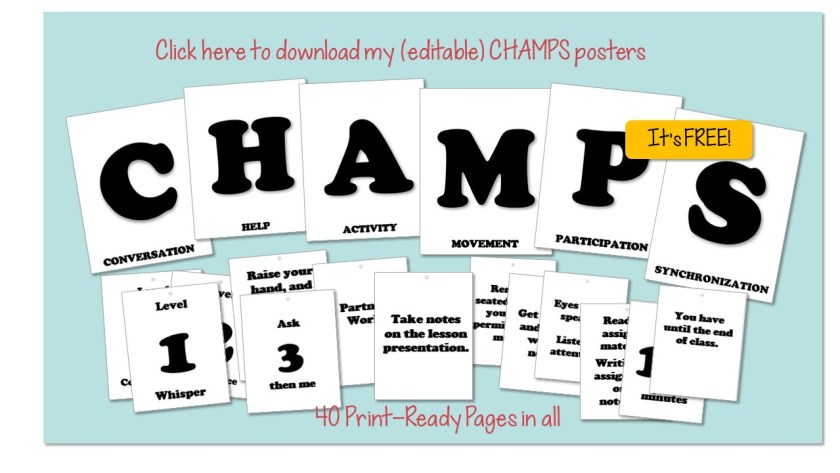 Last year I wrote about a B2S lesson that was wildly successful.  If you didn’t get a chance to read it, you can find it here. Today, I wanted to build on it by telling you how we formalized our social contracts—in a way that made them an oft-referenced classroom fixture.

Social contracts emerge from thoughtful discussion and spell out the expectations the students and teacher have for one another.  Those expectations are written out,  and all the stakeholders sign the document to signify their agreement to uphold it.  Then, it is posted in the classroom as a visual reminder.

I’ve used social contracts for many years, but to be honest, after the first quarter I rarely referred to them—until I found a way to make them more personal.

While mulling over ideas for an upcoming lesson on multiple meaning words, I had an epiphany.  Instead of having students sign their name to a list of rules and expectations—why not have them create a sign identifying a specific contribution they’ll make to enrich our class community. I’d photograph them holding their sign and post the pictures around the room.  Think “pet-shaming” with an affirmation instead of a rebuke. 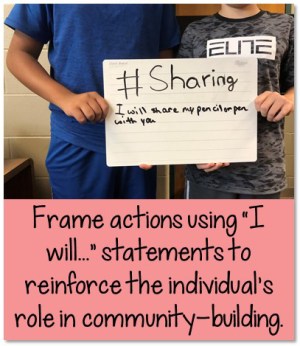 Part of the process of creating a social contract involves brainstorming specific acts that exemplify each ideal.  So, when we got to that step, I simply had students write their chosen action on a small whiteboard, then I snapped a photo of it.  To reinforce each person’s role in community-building, I asked students to describe their chosen action using an “I will…” statement.  (As you can see, this direction was not always followed…but it WAS day one, after all.) Don’t forget to create your own sign for each class identifying steps you’ll take to establish a respectful and productive classroom. 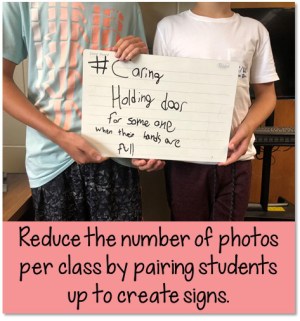 Now, our school is very particular about photographing students, so I framed each shot so it did not show student faces. Even if your school doesn’t have this restriction, it actually works in your favor to frame shots this way.  Not only is it visually interesting, but students love to study the photos and guess who was behind each sign. 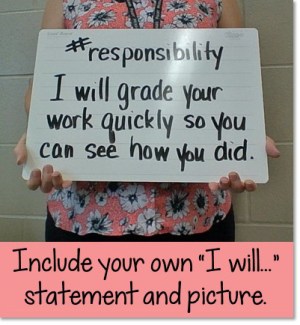 Displaying the resulting document is an important part of the social contract process.  So, I grouped the photos by class, arranged them using PowerPoint (Word works just as well), and printed them out on poster-sized paper.  If your school doesn’t have a poster-printer, you could simply print and group the photos by hand – or better yet, have students arrange and paste photos on a poster.  Then, display them in the room all year. 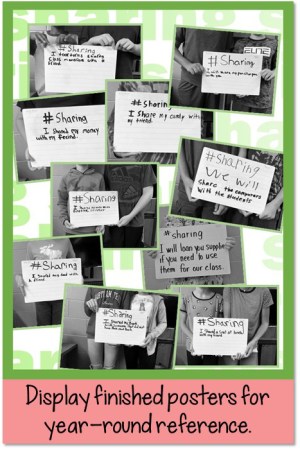 Using photos differentiated our social contracts from others around the school.  It personalized our agreements in a way a signature just does not do.  It also added a level of engagement that, for whatever reason, called our attention back to the ideal of working together again and again.