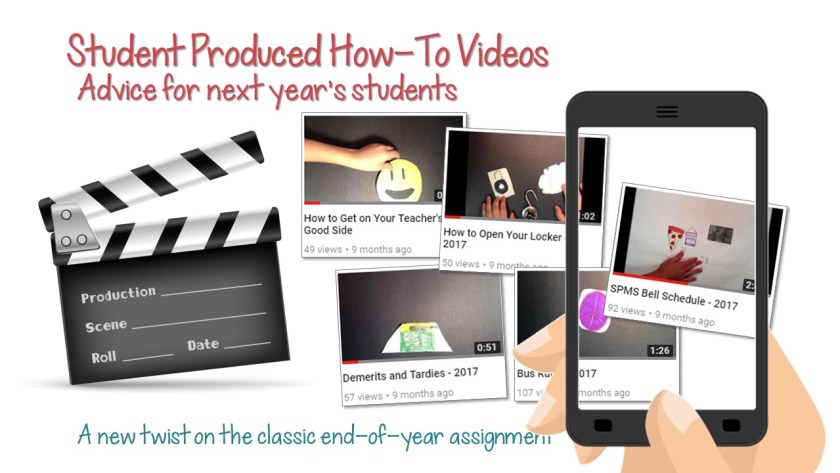 No doubt you’ve seen a common craft style video—a one-take “How To” production that uses 2-D illustrations and hand gestures to explain a process. Here’s an example of a common craft video that explains how to create a common craft video. Incidentally, I use this very example to introduce the project to students. While Mr. Fogle states in the video that it takes about 15 minutes to complete the project, my classes work on it for two weeks. Equipment needs are minimal: a video camera (iPhone or iPad apps are ideal), a desktop or space on the floor as your “stage,” and a light source (I use a clip-on work light  purchased for less than $10).

The project basically entails six steps: 1) Form groups, 2) Choose a topic, 3) Write the script, 4) Design the props, 5) Rehearse the video, and 6) Record the video. I perform a seventh step, editing, which takes me about an hour using a video editing app on the iPhone we use to record student videos. A fun “premiere day” serves as the culminating activity – usually the last day of school – where we all eat popcorn and watch everyone’s finished projects.

Step 1: Form Groups
Students work in groups of four, and again, I like to let students choose their own groups. Before they do, though, I tell them what skills need to be represented in each group. First, they need a writer to write or type out the script. Next, they need an artist to design the props. Third, they need a fluent reader to narrate the video. Finally, they need a camera operator who will also direct the video. You can combine the roles in a pinch, but you will need at least three students per group to manage moving the props on and off camera.

Step 2: Choose a Topic
I challenge students to think back on the things they found intimidating about starting middle school: opening a locker, changing classes, reading class schedules, rewards system, and so on. I let them pick their topic, so I get instant buy-in. At the same time, I caution them that only the best video for each topic will be shown at next year’s 6th grade camp (a two-day orientation for incoming students), so they have an incentive to branch out and be creative when choosing topics. This has resulted in some very creative ideas over the years, including “How to Make Friends” and “How to Get on Your Teacher’s Good Side.” 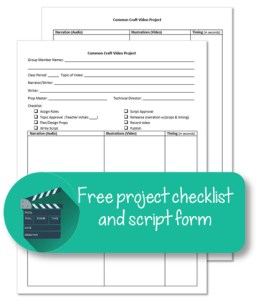 Step 3: Write the Script
The script includes BOTH the narrator’s lines and a description of the props and hand gestures that will be used to illustrate each scene of the video. Script-writing requires them to break down their topic into management steps or components, and to come up with a way to depict each one. I give students this script template to guide them through the creative process. Once the script is written, they also have to time each scene to be sure they have content to fill at least two, but no more than three minutes of video.

Step 4: Design the Props
In most cases, props consist of simple line drawings, though a smattering of small objects (pencil, combination lock, etc.) can be used to add visual interest. Caution students against using more than two actual objects as it creates visual clutter. Illustrations MUST be 5”-7” tall and should include bold outlines (refer to Mr. Fogle’s How-To video). Black and white drawings work just fine, but most of my groups like to spend time coloring their artist’s creations—and I usually let them linger over this relaxing activity since this time of year they are often testing in at least one or two classes every day. Remind students to make a “Good” and “Bad” card prop to hold up at the end of the video to mark whether or not it is their final take. Step 5: Rehearse the Video
Show students how to use a desktop as a “stage.” Alternatively, you can use a piece of poster board or a length of bulletin board paper on a desk or on the floor. Use painters tape or draw lines (I sometimes draw lines on the desktop with marker–it scrubs off with a magic eraser) marking which areas will appear onscreen and which will not be seen in the video. One student (on the left) will push props onscreen at the appointed time, while another student (on the right) will pull props offscreen at the end of the scene. Have them practice this process while the narrator reads the script aloud. The director should time them and provide feedback about the speed of the narration and movements. I tell students that when they are happy with their performance, and have done it at least twice without error, they are ready to record.

Step 6: Record the Video
If you have a quiet place, like a small office or walk-in supply room, it’s best to use this as your “recording studio.” That way, other students can practice quietly in your classroom while each group is recording their video.  I use an old iPhone as a camera (shown above), but any digital video recording device works.  The camera should be positioned a few feet above the surface where the props will be displayed. If you have a tri-pod, that’s great. For years, though, I used a cardboard box with a small hole cut in the bottom for the camera lens to peek through. I positioned it above a sheet of black poster board lying on the floor.  This year I upgraded my equipment, using a tripod with an iPhone mount that came with a handy remote “record” button.

Set  up the camera first, then use painters tape (placed just offscreen) to mark the edges of the visible portion of the poster board. As each student group is ready to record, I show them how to operate the camera, turn on the shop light (bounce it off a wall or sheet of paper rather than aiming it directly at the props to avoid washout), and remind them to count silently to three at the end of their final take before displaying the “Good” card onscreen. Honestly, even though they’ve practiced, they usually get overly excited and flub their first or even second take… so plan on allowing about 6 or 7 minutes for each group to record their final video. 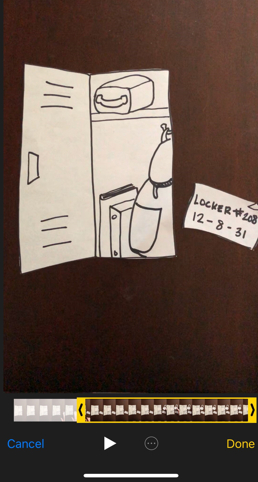 Step 7: Editing
If your students are tech savvy, you could have them complete this step. However, I generally handle editing myself simply for the sake of convenience.  Since these are one-take videos, I edit them right on the iPhone using the iPhone app.  (If you’re using a digital camera or laptop to record them, this software suite is a very user-friendly option, that lets you add titles, special effects, and more.)  Editing is where the “GOOD” and “BAD” cards are so important. (Thank you again, Mr. Fogle, for this brilliant idea.) All told, I’ll have roughly 100 video clips to review (2-3 per group X 36 groups). Anything less than 45 seconds long can be deleted without viewing since it’s obviously an aborted attempt. You don’t have to watch each video, just skip to the end and look for the good or bad card, and delete those ending with the bad. Once you’ve culled out the bad videos, trim the end to eliminate the frames displaying the good card. If you’re a perfectionist (and let’s face it, it’s a cross many teachers must bear), you can use the cropping tool to make sure the props are centered, and no edges show onscreen. 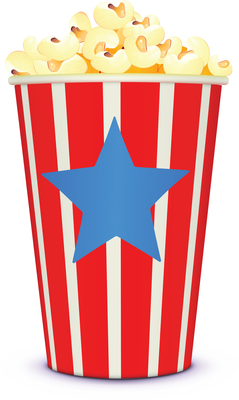 As I mentioned early, I usually have a video premiere day the last day of school where students get to watch everyone’s videos. It’s a lot of fun, especially if your school will let you serve popcorn, and the kids enjoy their moment in the spotlight when they get to share their group’s creation with peers. I’m fortunate to work at a school that encourages the sharing of student-created resources as well. So, in addition to sharing their videos with my other classes, selected student-videos are also shown to next year’s incoming 6th graders during a summer camp orientation program, and teachers show them during the first weeks of school to introduce school procedures and culture. I’ve even been permitted to upload them onto a YouTube channel to facilitate distribution and sharing (which adds a whole new level of cachet and incentive to create the best of its kind each year).

This brings up an important point about privacy and security. One of the advantages to using a common craft style video is that it does not show any student’s face or features (a big no, no in our district). I also caution students NOT to include their names in either their video title or credits – for privacy reasons.

Most teachers KNOW exactly what their kids need to reach the next level, which is why it is so frustrating when you don’t have the time needed to develop the lessons and materials you envision. Collaboration is the key; it just needs to take place on a larger scale than a single school community to be truly effective.

Here, I share ideas and resources I’ve tested in my own classroom. Every week, I’ll add something new — with lots of freebies and monthly giveaways.