Decades later, my husband can still recall being called out by an English teacher for turning in a written assignment that looked like “chicken scratching.”  Even though he’d tried his best, his handwriting—weirdly spaced with shaky lines– looked like it was produced by a very young child.  The teacher accused him of being lazy, but he was actually struggling with dysgraphia.

Dysgraphia is a nervous system disorder that affects fine motor skills used for writing.  It’s often associated with other learning disorders such as ADHD or dyslexia.  While it used to be an official diagnosis, now it appears on IEPs or 504s as “impairment in written expression.” Of course, I’ve also encountered dysgraphic students who had yet to be diagnosed.

So, how do you know if a student has it?  There are some tell-tale signs teachers and parents can look for.  First and foremost, students with dysgraphia are often described as having “messy” handwriting, with the following characteristics:

Students with dysgraphia may hold their pen or pencil in a tight or claw-like grip.  They may hunch over their paper or turn their hand (or paper) at an odd angle to write.  These students often avoid writing assignments and write much more slowly than their peers. Also, because so much mental energy is dedicated to task of production, it’s hard for students with dysgraphia to compose their thoughts while writing. 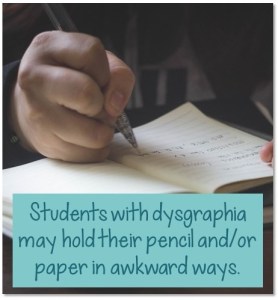 An official diagnosis can be made by psychologist or neuropsychologist, or an occupational or physical therapist can test motor skills.  However, if you suspect a student has dysgraphia, there are a number of ways you can help them.  In my next post, I’ll detail ways teachers can differentiate for students with dysgraphia, and how one teacher’s intervention made all the difference for my own significant other.