Yesterday was the first day of school in our district, and I wanted to share a lesson I debuted that exceeded all expectations!  In fact, I’ve never been so excited or felt so connected to students AFTER JUST ONE DAY as I do right now.  That’s why I dropped everything to share it with you.

Our middle school asks teachers to develop social contracts with students.  If you aren’t familiar with the term, it’s basically a signed document listing the expectations that students and their teacher agree to have for one another.  The idea is that everyone takes time to consider the classroom environment they’d like to have and acknowledge their role in creating it.  There’s a standard list of questions (What would you like our class to look like?  What do you expect from the teacher?).  Generally, a student records responses for the class to discuss and eventually agree to endorse.

It’s a solid concept that does start the year off on the right path.  However, in a middle-school setting where students and teachers have 7 to 8 different classes, you can imagine how repetitive the process gets to be.  So, this year, we were given license to adapt the process to suit our individual classroom content and style.  And that’s what led me to try something new.  Here’s what we did.

Before students arrived, I arranged the desks into groups of four.  I greeted them at the door as they came in, introduced myself and invited them to sit in the group of their choice.  (If you have a student survey, collect student data on index cards—or any simple task that requires no more than a few lines of directions written on the board—this is an excellent way to keep everyone engaged while you greet those still arriving.)  Once the bell rang, I took care of the usual housekeeping items: personal introduction, attendance, name pronunciation, and need-to-know basics for entering or leaving the room… you know, the standard stuff. 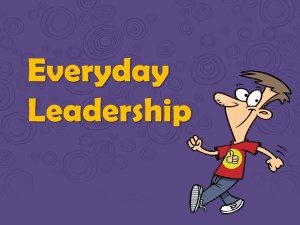 Next, I introduced the day’s activity with this presentation. (Just in case your perfectionism is as bad as mine, here’s a copy of the speaker’s notes I mapped out.  I updated them to reflect improvements made after delivering the lesson five times.)  After identifying the standard and Marzano-scale associated with it (yes, we do these for EVERY lesson, even on Day 1), I asked if anyone was familiar with TED Talks.  In most cases, I had to explain that TED Talks were speeches given by someone who was an expert on the topic, a speech that was filmed and loaded to the Internet so anyone could share the expert’s information.  I noted that we were going to watch a TED Talk called Everyday Leadership.  Next, I show the video (just 6-minutes) without interruption.

In the video Drew Dudley tells the story of a girl he met during her first day of college.  Unbeknownst to him, she was so full of fear and self-doubt that she’d made the decision to quit school, but through one humorous interaction between strangers, he put her at ease and in the process changed her life.  She didn’t tell him until four years later, and in revealing how his small act of kindness made him an important person in her life, she in turn helped him realize his own value in the world. 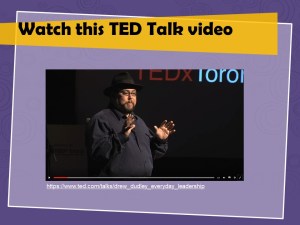 After we watched the video, I presented students with questions to discuss with their group and briefly reminded them of the collaborative discussion traits outlined in the lesson scale we went over (listening while others talk, adding comments and asking on-topic questions).  Then, I circulated as groups talked, prompting as needed.  I expected to do more redirection of off-topic conversations, but the subject and story-telling in this video was so engaging students stayed focused almost without exception.  After a few minutes of discussion, I asked each group to choose a spokesperson to share their answer with the class.  I let them know the role of spokesperson would be shared, so a different person would be speaking for the group on each question.  Incidentally, watching how each group selected their speaker–not to mention circulating during the discussion–helped me spot the natural leaders, the quiet-but-thoughtful ones, and those who struggle with comprehension or focus.

If your schools allows treats, while students discuss the second question you can pass out lollipops to everyone.  It breaks the ice, puts everyone in a positive frame of mind, and it’s a rare opportunity where enjoying sweets IS reinforcing the point of the lesson. 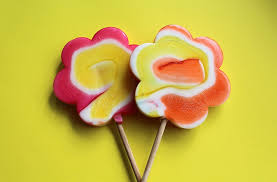 As students shared their thoughts, we learned a lot about one another’s values, experiences, and communication style and ability.  The greatest insights were revealed when students shared their “lollipop moments.”  Before asking them to discuss this, I acknowledged that this particular question required them to be brave.  Sharing an important moment in your life, especially in a group of people you don’t know well, means risking vulnerability.  At this point, we’d already seen the video and discussed how the girl felt scared and alone until Drew’s actions showed her the people around her were nervous too.  I shared my own “lollipop moment” to spark the conversation, and then I circulated, listening thoughtfully as students candidly shared moments where they’d been either the recipient or giver of a small act of kindness that had a big impact. 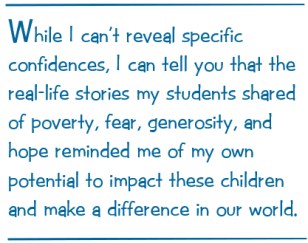 While I can’t reveal specific confidences, I can tell you that the real-life stories my students shared of poverty, fear, generosity, and hope reminded me of my own potential to impact these children and make a difference in our world.  Don’t you just love it when a lesson you design to inspire others, fuels your own passion in turn?  I can say with some degree of certainty that my students felt the same.  As they worked on the culminating activity – identifying one word that summed up the actions of either Drew or the girl (kindness, generosity, appreciation) and brainstorming other acts that demonstrate that trait—they were already modeling helpfulness and respect toward one another.  I could see that those values, and the idea that our classroom was a safe place in which we could trust one another, were already taking root.

Over the next few days we’ll formalize our social contract, spelling out these values that we now embrace.  More than ever before, though, this contract has spilled over the edges of the page and the ideals it represents are already embedded in our class culture.  Thanks, Drew!

Teaching middle school English and Reading is my "encore" career, a passion I chose to indulge ten years ago, after 20 years in marketing and corporate communications. I love the collaborative nature of teaching, and love sharing ideas and lessons with peers like you!